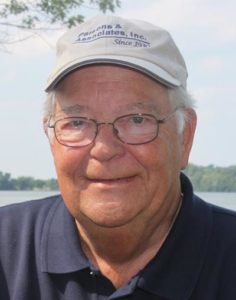 A U.S. Army veteran and 1959 graduate of Dartmouth College, Chuck Parsons was president of PIANY in 1975 and 1976. He achieved his Certified Insurance Counselor designation in 1976 and he served in every PIANY office and committee. He was awarded PIANY’s Committee Chairman of the Year award in 1970 and he served as a director of PIA Management Services well beyond his tenure as PIANY president.

In 1995 he was named “Insurance Person of Distinction” at Syracuse I-Day. The honor is presented jointly by The Independent Agents of Central New York, the Syracuse Chapter of CPCU and the Syracuse Insurance Professionals.

At the August 3, 2016 James K. Ruble seminar conferment ceremony in Verona, N.Y., Dr. William T. Hold, CIC, presented a plaque honoring Chuck for 40 years as a CIC to his son John, as Chuck was unable to attend.

At the time of his passing, Chuck was chairman of Parsons & Associates, Inc. He was instrumental in the development of the Lawyers Professional Liability Program, among others. Chuck instilled in all of us that being in the insurance industry you have the ability to make a difference in someone’s life every day. He certainly did just that in many ways in not only the insurance industry but the entire community of Central New York and beyond.

Charles R. (Chuck) Parsons, CIC, a Certified Insurance Counselor (CIC) and agency Chairman, joined agency sales in August of 1962 following graduation from Deerfield Academy and Dartmouth College. Additionally, he served over two years of active military service as a U.S. Army 1st Lieutenant in Germany, including during the Berlin Wall Crisis. Following the death of John C. Parsons in November of 1973, Chuck and his wife, Elfriede, purchased the outstanding shares of the agency.

Deep involvement within the community and insurance industry has been a vital corporate commitment to Chuck. While serving many years as a Trustee and then as President of the Syracuse Rescue Mission, Chuck also played the role of a Dartmouth College District Enrollment Director in Upstate New York and spent four dedicated years as a Dartmouth Alumni Council Representative. He is a member of the Professional Liability Underwriting Society (PLUS) and a past member of Syracuse Kiwanis and the former University Club of Syracuse.

Chuck’s contribution to industry activities include service as a past Director of both the Independent Insurance Agents of Central New York and the Professional Insurance Agents Association of New York (PIA) – of which he also served as president in 1974-1975. He was also the recipient of the Insurance Person of Distinction Award at Syracuse I-Day in 1995.